A bike ride from Paris to Brittany, along the Seine, the Loire and the Nantes-Brest Canal. Day 6

Extraordinary breakfast ! French toast, crêpes, croissants, fresh fruit juice, fruit, dates etc... Definitely, this is a place that I strongly recommend to fellow cyclists on the 'Loire à Velo' trail. While talking with Mrs Lamour, we discovered that we had common acquaintances: former colleagues at Poclain !  The world is a very small place indeed ! (this was reconfirmed in October 2012, when I stayed at l'Antre de Brocéliande in Courtils).

Late start at 9.30 AM. since all my gear was either hanging to dry or scattered all over  Mme Lamour's basement, it took  some time to re-pack and reload Rock'n'Roll.

Over the bridge again and continuation along the left bank. Half an hour of dry weather then it started raining again ! Heavy drizzle, rain, wind the full Monty ! In Ancenis the track crossed the bridge and travelled along the right bank. The weather suddenly became so miserable that I had to stop for 30 minutes under the concrete canopy of the Ancenis Municipal theatre.

After a while, the rain finally stopped allowing the cyclist to resume the journey West. River crossed once again in Oudon. Picnic in La Varenne between two more showers. Last leg to Thouaré sur Loire where I had decided to catch the D37 to Carquefou and Sucé sur Erdre.

After getting a stamp in my logbook at the Post Office in Thouaré, I spent another 30 minutes sheltering under the trees in the middle of a roundabout in Carquefou.

The weather finally cleared and the sun came out ! What a change to see blue sky and puffy cumulus clouds. The front was on its way East and the bonus for the rider was a change of winds ...

The Tourist office in Sucé sur Erdre was closed. A sign on the door indicated that the nearest one was located in Nort sur Erdre, 13 km up the road. The lady there found a B&B for me, located on the road to Blain, near Le Cramezeul lock, on the Nantes-Brest Canal. Quick stop at the Super U to do some food shopping and final run to the very nice guesthouse operated by Mr and Mrs Lethiec (therese.lethiec@orange.fr) In the evening, quick call to Daniel to confirm that I'd be in Malestroit the next day ! "La Joie de Vivre" was back !

My "room" in the B&B was the whole top floor of a converted "Longère" (a long, 'low-profile' farm house, often found in villages in Brittany). The owners had put a lot of work into their property that was even equipped with a swimming-pool (thank you very much for suggesting a dip but I'd had my share of cold water in the last couple of days !...). 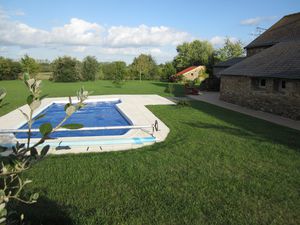 Once again the family clothe-lines were taken over. Everything was hung to dry in the late afternoon sun.

Rock'n'Roll was parked for the night in a small shed that housed a traditional bread oven. It was used once a year during the village Fair.

After a solid meal and some rearranging of the bags, the rider hit the pad for a session of serious snoring !