Rothenburg 4.00 AM. In spite of a super quiet camp ground, woke up at day-break freezing cold ! The river was just the other side of the fence and dew was intense. Got up and ready to go. Swallowed a mug of cereal and milk at the camp entrance before leaving.

Another trip to the city at the top of the hill, this time fully loaded, to get onto the road leading to Neusitz, on the other side. The first hill of the day was long but manageable. The countryside was rather level along the early part of the Altmühlweg although we had to push the bikes up the hill in Wachsenberg !

Linden: a nice little town with clean streets and small houses with gardens in front; lots of flowers and shrubs; probably a bedroom suburb of Rothenburg.

Cadolzhofen: a farm community perfumed by a powerful stink of pig manure...

Super breakfast in Burghausen at the 'Korn' farm then back on the Paneuropa Radweg through a string of small villages.

Had to stop in Flachslanden at a cycle shop since I was having a few head-aches with the rear derailleur. The guy looked at it and bent it back into shape. I thought that Daniel had seen me enter the yard.  He hadn't and continued on his way. We finally met again a few kms later: he'd been asking everyone if they'd seen another cyclist... He was rather unhappy ! We stopped in Dietenhofen for'lunch'opposite a church with a multi-colored spire.  The catering service did a rather poor job that day: tuna fish, apple sauce and water !

From that point we just followed the Biberttalweg. It lead us slightly North-West of Nürnberg, to Fürth. We probably ended up doing a few un-necessary extra kms.

As a consequence, we came into Nürnberg following the Pegnitz river and finally hit the city, not too sure how to find the Centrum. I asked some policemen sitting in a car on the side of the road for directions to the city center. All they could say was "follow the cars...", with a smile...

They were right ! The street lead us to the Hauptbahnhof (main station). There, we crossed the huge intersection and got a stamp, some maps and indications to the camp ground from the Tourist Büro. Crossing streets in this city was a bit tricky. No way could we have jaywalked like we'd have done in France... People in Germany wait for the 'little man to turn green', (and considering the size and the speed of the cars, they're probably right...). 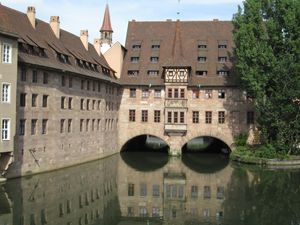 The camp ground was open: we just had to follow the signs and the map that the young lady had highlighted... Before heading there, we went into the 'old' town. The whole area, having been flattened during WWII, is a replica of what it used to be. Beautiful !

Having enjoyed a cool Weiss Bier in the late afternoon sun and done some shopping at the local Netto, we started looking for the camp ground, "just following the signs". A few more kilometers and a lot of powerful swear-words later we finally found the entrance, just opposite the Messe buildings.

It was a few minutes after 6.00 PM. The Camp attendant had left so we entered the grounds, set up the tents, used the facilities, went through the evening ritual, ate and went to 'bed'. In spite of the distance and the heat, the day had been OK : it had not been too physical !