Miserable weather to start with, gradually improving as we got closer to Prague.

Heavy rain all night. No way I was going to get out of the tent to relieve the bladder. Such an adventure would have meant getting dressed in rain clothes inside the tent... a totally unrealistic proposition... and my nylon poncho was in one of the bags still on the bike that was tied to the tree ten meters away.

6.00AM: no need for a wake-up call, the rain was making enough noise ! Rolling up the sleeping bag, the pillows and the inflatable mattress, bending over on all fours inside the tent, and getting everything packed into the waterproof bag was an excellent way to warm up for the 90 or so kms that lay ahead of us today.

The miserable weather slowed us down but we finally got the aluminium donkeys loaded and ready to go. The soaking tent was once again rolled up in a bundle and shoved into a plastic bag, dripping ! Dressed like Breton fishermen, we finally left the lake side at 7.00AM having skipped breakfast.

In Dobriv, we tried a small café: closed. Same result in Strasice. No option but to continue in the rain, up and down through fields and forests. Tene, Olesna... there, a sign indicated that the road to Komarov was closed, indicating a 20km detour. We decided to continue nevertheless since we reckoned that with the bikes we would be able to make it.

We got to Komarov after a super long 5km glide downhill only to come to a dead end: the bridge crossing the river had collapsed and was being rebuit.... After careful checking we had to admit that it would be pretty difficult to get to the other side of the river.

We were left with two options: either we unloaded the bikes and carried everything over a narrow construction gangway with a serious risk of something or someone ending up in the river, or we climb back up the hill and go the full length of the detour. Merde !!!

A lady from a neighbouring house came out and saw the two miserable cyclists. She called her husband with whom I was able to exchange a few words in Russian. The good man had come with a bunch of keys and unlocked a gate that closed a small road climbing through a residential area, explaining that we could get to the other side of the river using another bridge a few hundred meters away. The local authorities had blocked this road to prevent trucks and other heavy vehicles from using it and destroying it.

Thank you 'Neighbour', you saved our day !

In Horovice we finally came accross a small café. But there was nothing to eat apart from a couple of stale sandwiches that were far from inspiring... We decided against food poisoning so it was coffee with energy bars instead. The town square at the top of the hill was interesting. One one side, a beautiful classic pastel-coloured building; on the other side, a massive ugly concrete structure that had probably been the Town Hall or the "Cultural Center" in Communist days. Quite an architectural contrast ! 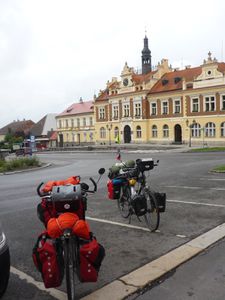 Not too sure which way to go on our way out of town, we checked with a young couple just outside the local hospital. Their directions added 4 unnecessary kilometers to our day... A couple of hours later it was Sunday lunch in a corrugated iron bus-stop shelter near Skuhrov. Not very luxurious but dry and equipped with benches. The rain had finally stopped and the skies were gradually clearing. We were now pretty sure that with a bit of luck,  we could make it to Prague before the end of the afternoon! The last leg, via Radotin, took us through a string of sad villages in various states of disrepair.

We were now both on the lookout for the "arrival sign".. that finally materialized, in the middle of nowhere in the form of a small enamel plate stuck sideways in tall weeds on the side of the road, bearing the words: "Hlavni Mesto Praha". Just to be on the safe side we shot a few pictures of it. A good thing too, since there would be no others.

The final kms took us along the Moldau river, due North. We passed the camp ground and decided to continue to the city center and find a place to stay in town.

After getting lost a couple of more times we ended up on the main square, just underneath the Astronomical Clock.

Still dressed in rain clothes, our dirty bikes fully loaded, we looked as if we had just arrived from Mars. A few tourists asked us where we came from and how we had made it to Prague... On telling them we'd just arrived from Paris by bicycle, some of them -French- asked if they could take pictures of us...  We would have gladly signed autographs but time was running and we had two urgent things to do:

2° find a hotel that would accomodate the cyclists and their metal donkeys.

After fighting our way through a huge, noisy, inebriated crowd of young hockey fans celebrating the victory of the Czech team over the Russians - being watched by a squadron of fully equipped 'robocops' - we ended up at Hotel Rubicon, ideally located in the city center, on a very quiet street. The bags were unloaded and taken upstairs and the bikes locked up in the laundry room..

After a welcome shower and shave, the tents were hung to dry from the bedroom window, dangling two storeys down into the back yard of the hotel. The trip was over !

With Rock 'n' Roll locked away and a change into 'civilian' clothes, the spell was broken. I was now no more than an average tourist visiting the city... my mind trying to realize that the dream had come true, tossing back and forth the events of the past 19 days: the landscapes, the encounters, the scents, the colours, the North Easterly wind... happy and sad at the same time, but proud to have made it: 1 591kms of paths, roads, tracks and lanes that lead us all the way from Paris to Prague.