bike rides along the ourcq canal and marne river

The Ourcq Canal ‘exits’ Paris from the North-East ‘corner’. For cyclists, apart from following the Marne river, it is the only convenient way out of the capital city,

Anyone planning to head North, South or West is in for major head-aches and frustration due to a total lack of safe sign-posted cycling infrastructure.

The Ourcq canal flows from Mareuil sur Ourcq into Paris, along a 96 km run. The ‘end point’, at the Paris end, is ‘Bassin de la Villette’, adjacent to the Parc de la Villette.

Heading out of Paris under the 'Périphérique' ring-road, one passes the "Grands Moulins de Pantin", which used to be a flour mill. Several years ago, the building was totally refurbished by BNP bank. It is now one of their office buildings. From this point, the canal weaves its way through 15 km of suburbs, to the ‘Parc de la Poudrerie’, an interesting intermediate stop located in Sevran.

It then continues through the countryside, passing through Meaux and ending in Mareuil sur Ourcq. (Round trip to Meaux is 100 km -there are frequent RER trains from Meaux to Paris Gare de l'Est. They allow bikes on board, except during peak hours-)

The canal was built in the early 1800’s, originally designed to provide Paris with a safe supply of drinking water…

I’ve cycled along this canal many times and have made side trips and variations to the basic ‘round-trip’ runs, adding interest to otherwise monotonous ‘there and back’ rides.

Over the years, I’ve discovered several interesting ways to link the Ourcq and Marne waterways, allowing for short or long ‘loop’ rides of varying lengths and scenery.

In this article I shall start with a basic run from Paris to Jablines Leisure Center, a very easy 70 km (alt. 85km) round-trip ride. In case of need, there are RER  B Line train stops in Sevran, Vert Galant and Villeparisis. Some time back in 2011… It was a beautiful late-fall day. Blue sky, crisp weather, no wind and lots of sunshine. No way the bike nor the rider could justify staying home.

For me, living right next to the Parc des Buttes Chaumont, accessing the Canal is a short ride down Rue de Crimée, Bd Jean Jaurès and Rue de l’Ourcq, at the bottom of which there's a direct link to the Ourcq cycle track.

Obviously, there are plenty of other possible starting points in Paris that will be chosen according to where one lives or how easy it is to park a car. (There is an underground carpark at Cité de la Musique, located in the Parc de la Villette).

As already mentioned, the first part of the cycle track along the canal makes its way through several North-Eastern Paris suburbs : Pantin, Bondy, Aulnay, Pavillons sous Bois, Sevran… During weekends the first 10km or so can be quite busy unless one considers early morning rides.

For a while, the scenery is mostly the back side of buildings, sand, gravel and recycling yards, an SNCF maintenance center etc. It then gradually evolves into traditional suburban housing.  Over the years, lots of money has been spent by the neighboring towns to improve the track and make it pleasant for cyclists.

One negative comment though… in an effort to reduce the speed of some of the ‘Tour-de-France-Sunday-morning-Lance-Armstrongs’, dozens of speed breakers have been installed, just thick enough to snap one’s lumbar vertebrae and/or shake one’s bike free of nuts and bolts…

For those interested in ‘street art’, there is a section not to be missed, located approximately 4 km from the Périphérique underpass. It’s a 500m wall on the other side of the canal, just opposite the Métro depot. From time to time, there’s some pretty interesting work to be seen.

Working his way to Kandinsky.. 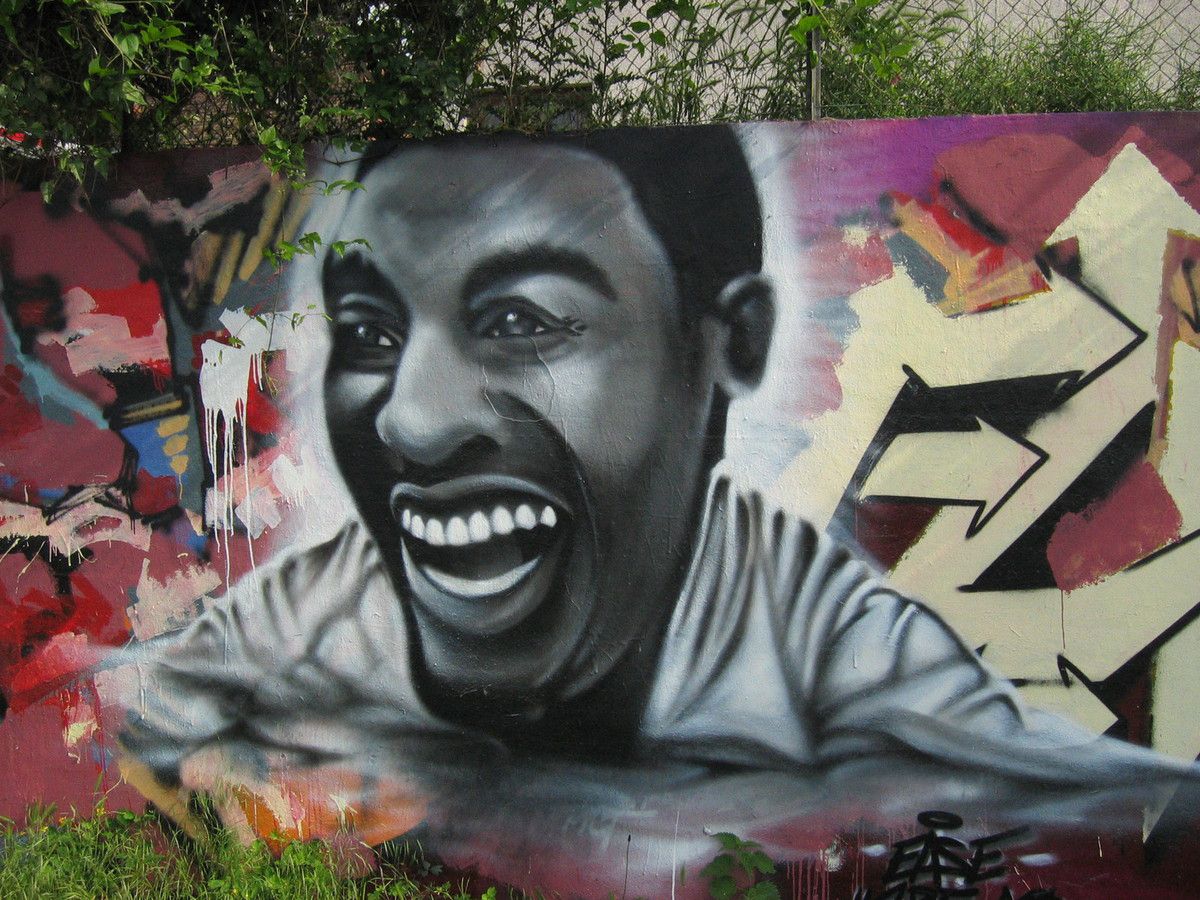 A smile costs nothing ! Inspiration comes from sniffing the can... The next day this one was painted over... What a waste of talent ! This one only lasted a week. What a pity ! 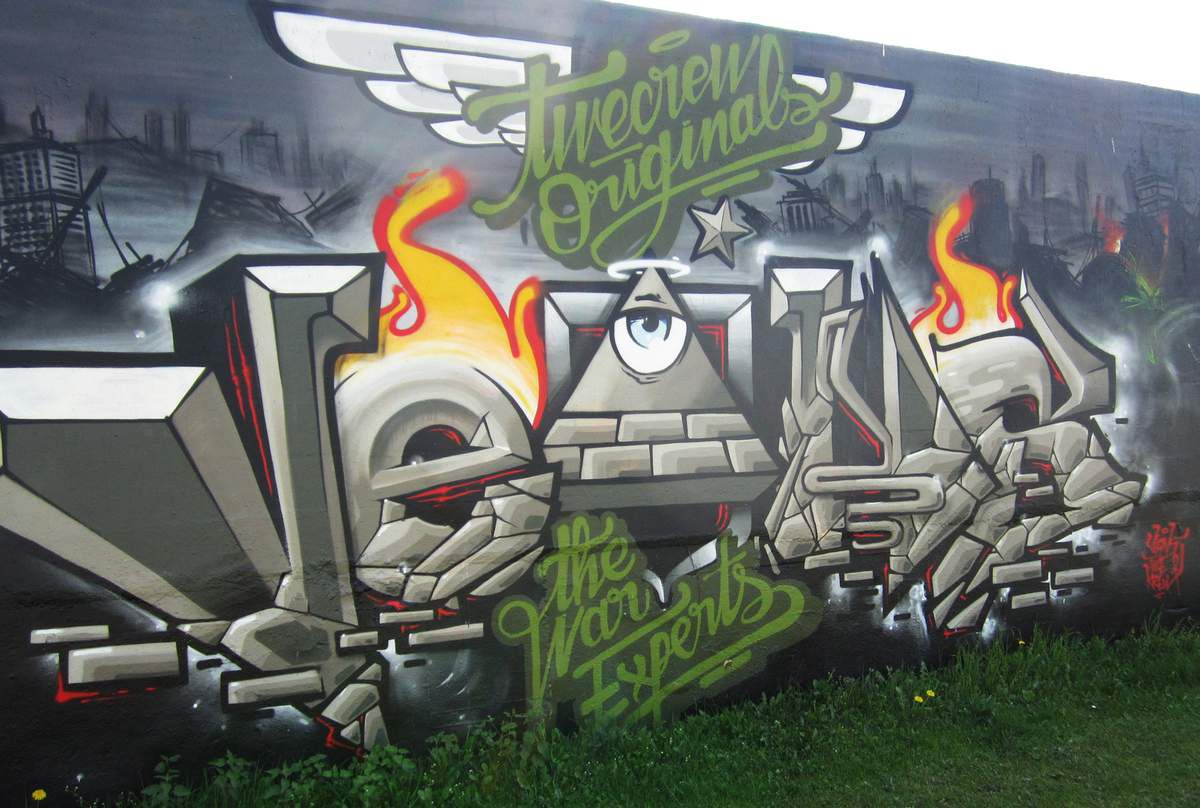 In Sevran, having passed by the lock there’s a bakery on a street corner on the right that sells sandwiches and other goodies. Pretty helpful for a picnic in the Parc de la Poudrerie, located a few hundred meters further along.

The cycle track enters the Parc de la Poudrerie through a massive wrought iron gate, and, if one then makes an immediate left turn, it continues in a straight line, all the way to the other end of the park.  Approx 100m before that point, the track takes off to the left, up a sudden, steep but short hill, and runs down the other side back to the canal.

The park itself is worth a stop and more if desired. In the old days, gun powder was produced here in a series of buildings strewn throughout the woods. Several of them are still visible today. For obvious safety reasons the small units were built relatively far apart from each other, separated by the trees of the surrounding forest. A narrow gauge cable railway fed the work-shops and moved production around. (At the entrance of the park, if one turns left, instead of going through the wrought iron gate, thus passing over the canal, one ends up in field that used to be a testing area for the local production).

The park is ideal for all sorts of activities: picnics, jogging, cycling, kiddies’ games, soccer practice, sun-bathing, bird-watching etc.. In summer, ice-cream, drinks and snacks are available from a kiosk in the center of the park.

Spring and fall are two lovely seasons to visit the place. The colors can sometimes be quite unreal. One of the alleys of the park 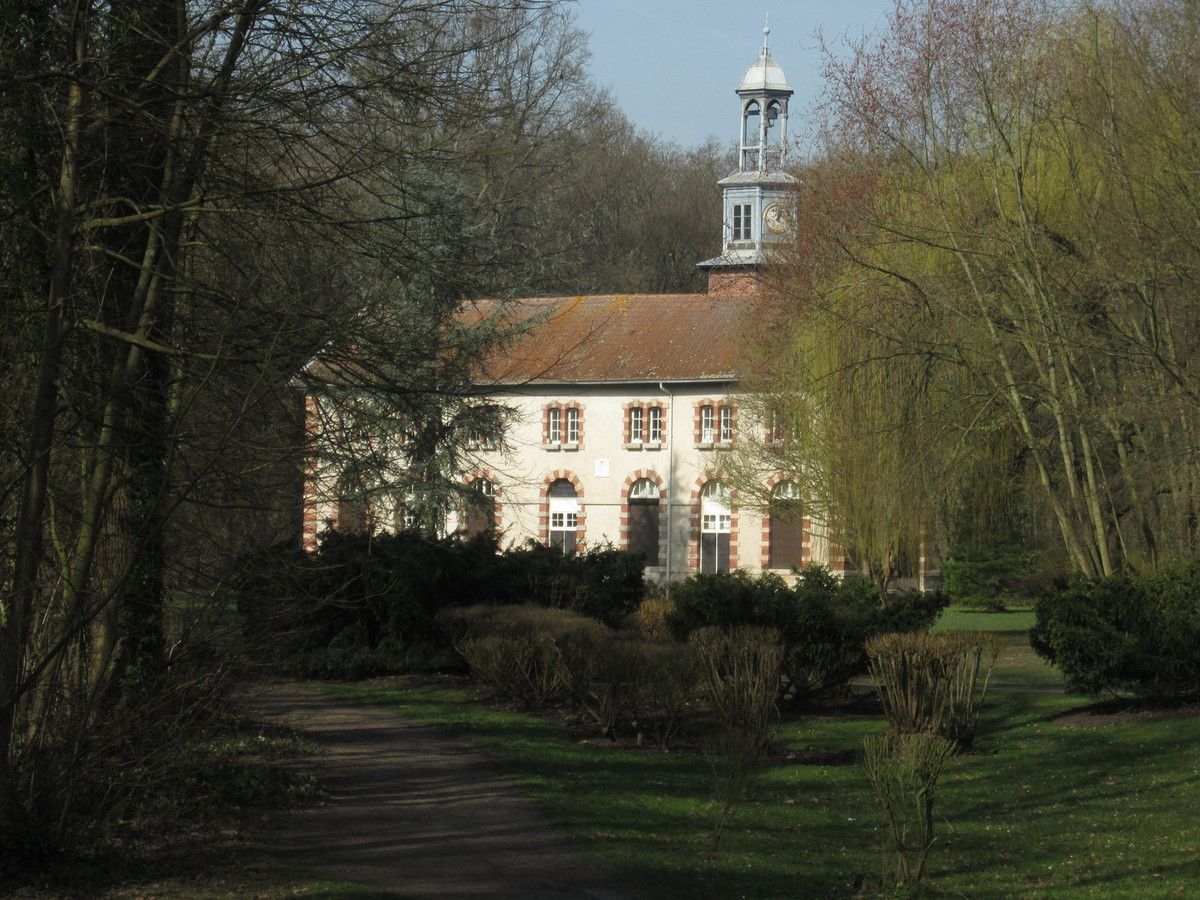 Occasional exhibitions are held in this old building

For those interested in trees, it is worth mentioning the three ‘giant’ sequoia trees located near the small animal pen/zoo.

As already mentioned, the exit at the end of the park leads back to the canal.

From this point, it is up and down all the way to Pont de la Rosée, (Dew Bridge) on an excellent asphalted track that ends there. (In Autumn, better be careful with the wet leaves to avoid skidding accidents...).

Halfway between the Parc de la Poudrerie and Pont de la Rosée, just opposite the RER station, the track changes sides and continues in the open for another 4 or 5 kilometers, till it ends..

At this stage the round trip distance from Bassin de la Villette is approx. 50km.

Quite often it is possible to see a coypu swimming across the waterway. Even though they are vegetarian animals, they have been declared harmful due to the damage they inflict on the soft banks. 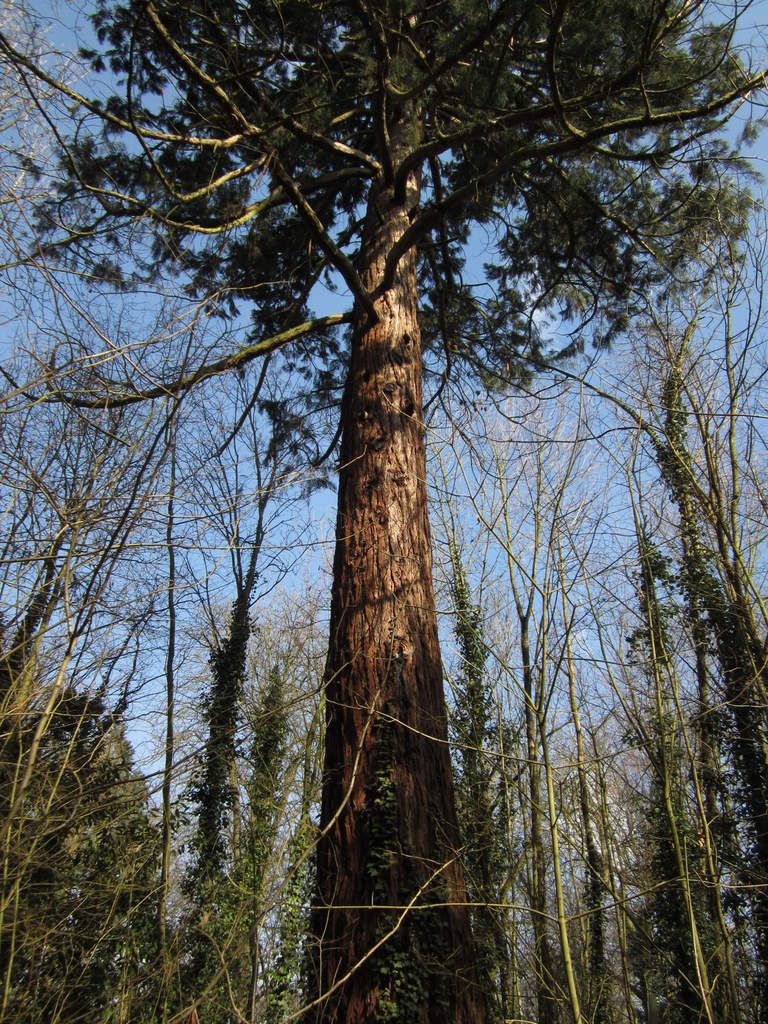 One of the Sequoia trees

Even though a sign prohibits access to the track (due to an obscure 1930’s law that has never been repealed), everyone continues on to Claye-Souilly, a small town situated a couple of kilometers further upstream. On arriving there, the canal widens this side of the bridge near the Town Hall gardens.  There are several benches. Unsuspecting cyclists quickly find themselves sharing their picnic with a family of swans that hiss if not fed quick enough.. 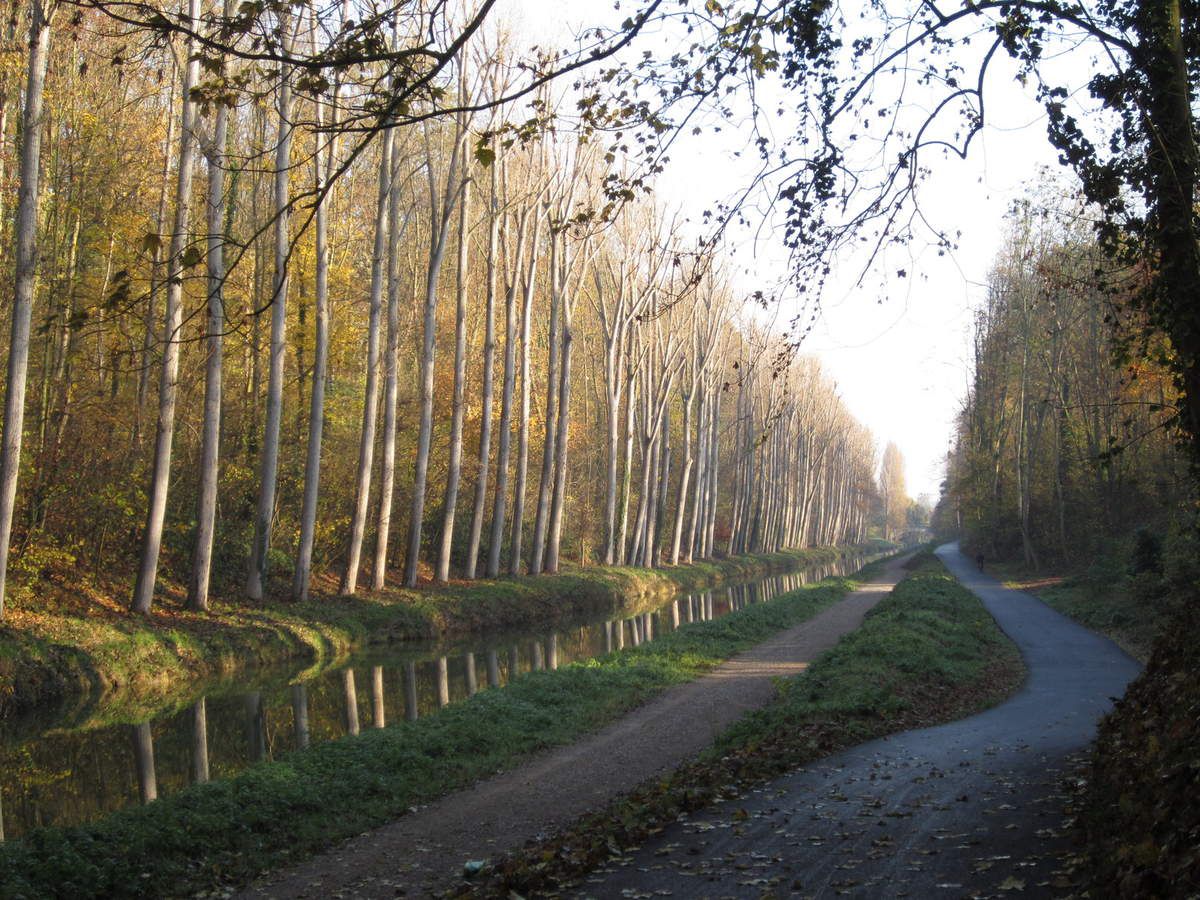 On the way to Pont de la Rosée 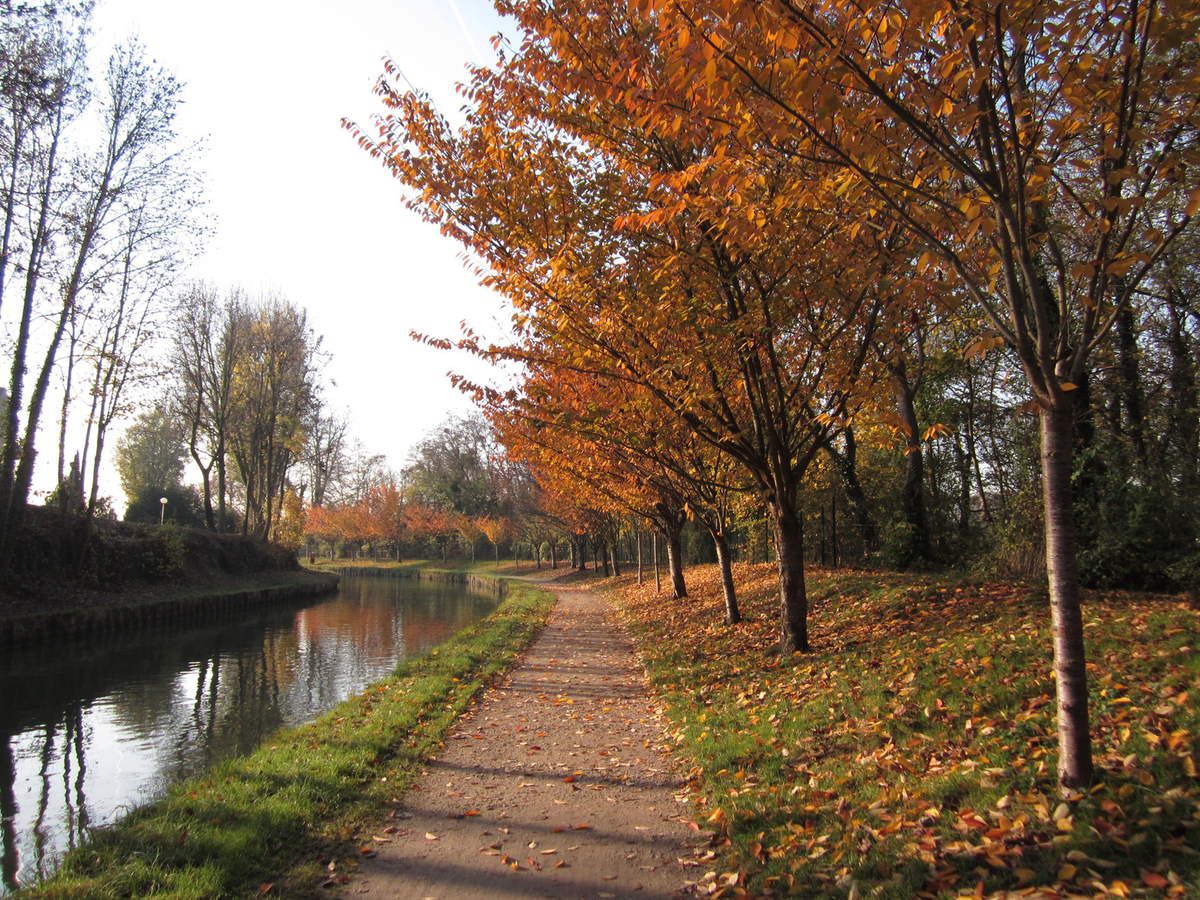 The sand and gravel track goes all the way to the bridge and then, after crossing the road at the lights, switches to asphalt, continuing along the canal for a few hundred meters. House with a view in Claye-Souilly

Just before the restaurant (Taverne Chez Romuald), turn right into Rue de Vilaine and continue for a couple of hundred meters to the intersection with D418.

At the Stop sign, turn left onto D148 towards Annet sur Marne. There’s a short hill out of the village that takes the road to a ‘plateau’, then over the TGV line and finally down into Annet, a couple of kilometers further away.

Cycle through Annet towards “Base de Loisirs de Jablines”. Be careful crossing the roundabout. Exit opposite side. Pass over the Marne River and 200 m beyond, enter the park through the small side gate on the right. (If it happened to be closed, continue straight on a few hundred meters until you reach the main entrance).

There’s a fee to enter the park during the summer months but from September to mid/end May entrance is free. (See their website for details).

The Base de Loisirs is another ideal place for a picnic! It offers all sorts of water sports including water-skiing driven by an over-head cable system.

At this stage there are two ways to return to Paris:

-or, exit the park through the main gate, cycle to the village of Jablines (1km), cross the village towards Lesches. At the stop sign at the bottom of the hill, turn left towards Trilbardou (approx. 3km). Trilbardou village seen from the bridge over the Marne River

On arrival in Trilbardou  cross the bridge; immediately thereafter, make a sharp left turn down to the small road that follows the Marne River till you reach the ‘Usine élévatrice’, (Historical Monument, approx. 1km from the village). On arrival at this location, climb the steep grass path on the right, opposite the Usine élévatrice, up to bank of the canal.

The purpose of the Usine élévatrice was to pump water from the Marne River into the canal to maintain proper levels. It was built here due to the very short distance separating the two waterways.

From this point, returning to Paris is simple: just follow the canal downstream. 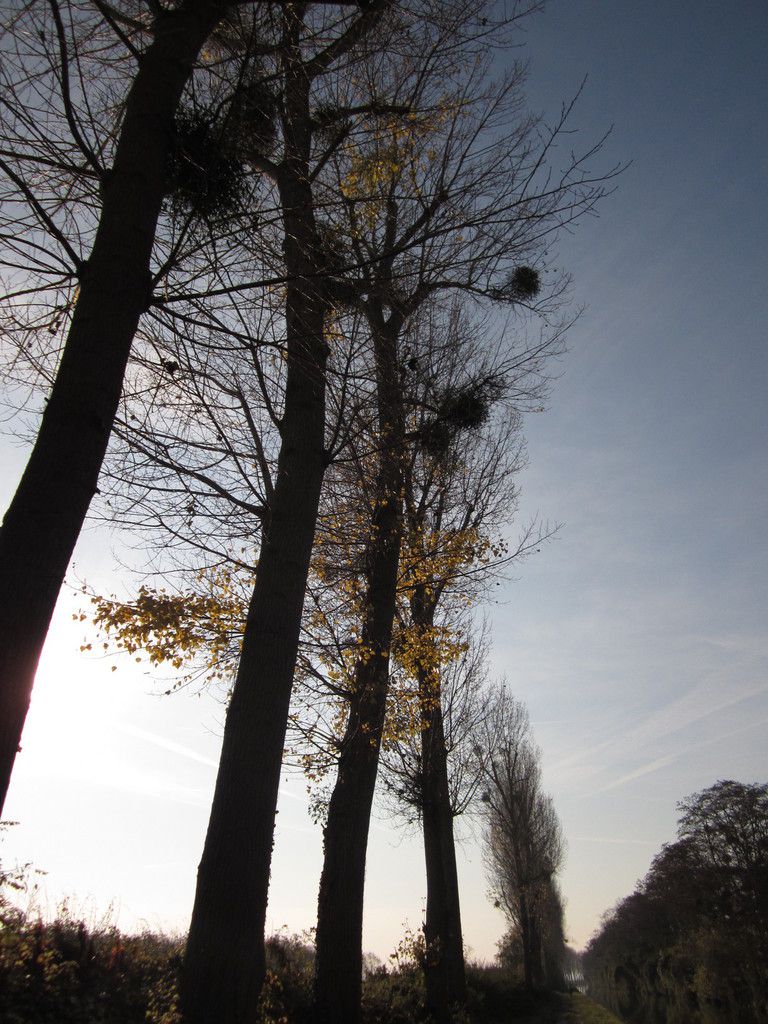 On the way back to Paris With a bit of luck a heron will be waiting for you somewhere along the banks of the canal, flying away and landing a few hundred meters further each time you get too close. On other occasions, water tortoises show their swimming abilities, paddling frantically against the very slow current.

Ducks line the banks, their heads tucked deep into their feathers, totally unaffected by cyclists.

The gradual return to the city breaks the spell, in spite of the reflections on the water. 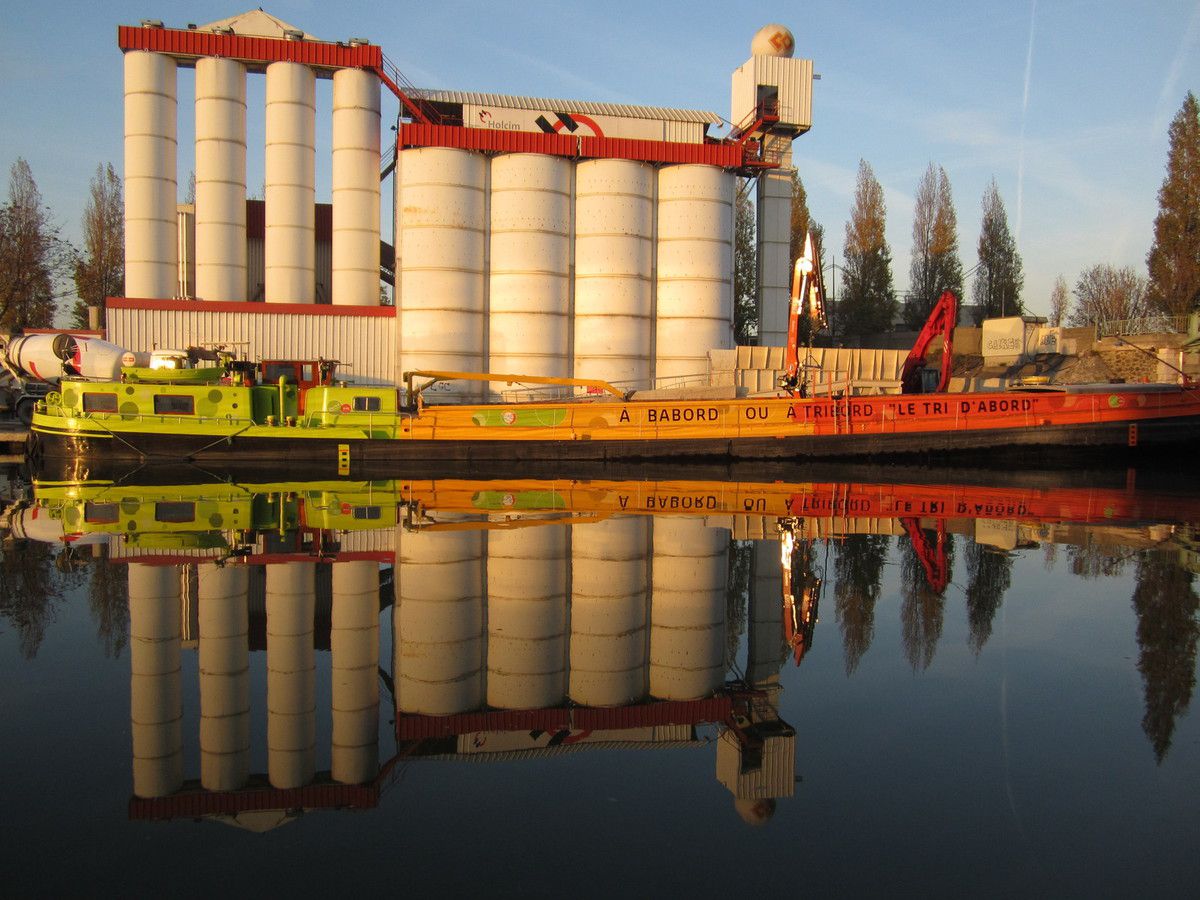 However, if you make it back to the Bassin de la Villette around 16h30 (in November) on a clear day, you will be offered an incredible sunset, a reward for all the efforts made !

This outing is about 85 km round trip and can be done any time of the year (except after heavy rains), without much hassle, by anyone in decent shape, riding a city bike. There are no real difficulties, plenty of places to stop for picnics (and/or decide to turn around) and even a couple of RER stations in case of need.

Next articles will cover some nice outings along the Marne river and/or a combination loop of Marne and Ourcq. 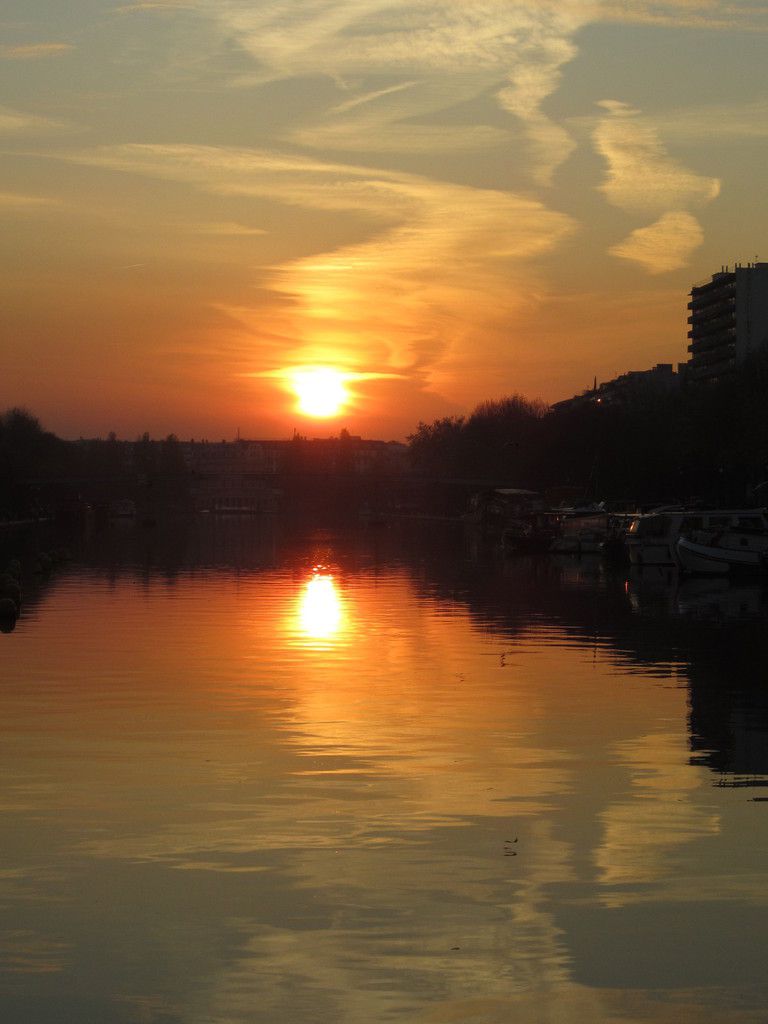 This was my reward on that lovely November day