Awoke at 4.00 due to a cramp in one leg and a need to evacuate the beer and wine from last night's dinner. No way I was going to get out of my sleeping bag in the middle of the night.. An hour later, I'd lost the fight !

Up; shower; tent folded soaking wet because of heavy dew; quick breakfast. The bikes and clothes were under cover but the clothes were still damp... had to roll them in a plastic bag. They'll finish drying tonight !

Once the aluminium donkeys had been loaded we had to find our way out of the camp. The attendant had locked us in.... Finally made it through a narrow service gate, just wide enough to let us slip out. Another Frühstück in town before heading for the border. Radweg to Eslarn, then super ride on a forest road towards Tillyschanz. Last German stamp at the Rathaus ! One final German hill before enjoying a beautiful long downhill ride all the way to the border. 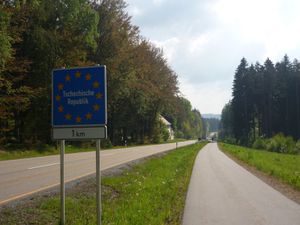 The border area was depressing. The Czech side was a clutter of junk shops selling all sorts of cheap odds and ends. We stopped at the petrol station to get our first Czech stamp. It was just before 10.00AM.

The posh building, right next to the church which marks the beginning of the cycle path, was a whore-house ! At that time of the day, the ladies were airing out the place !

The beginning of the Czech track was more 'physical' than the smooth cycle paths we had gotten used to in Germany. Many years ago, the path probably had an asphalt finish when it was used by border guards for patrolling purposes.

What we were now facing was a very deteriorated track, full of pot holes and pebbles. To make matters worse, it was up and down non-stop and our loaded bikes with 5-bars in the tyres were sometimes difficult to manage. Fortunately it was dry ! In spite of the beauty of the scenery, we decided to exit cycle path 37 at the "Waldorf" intersection and to continue on the excellent road, through the forest.

The first town we came accross was Bela nad Radbuzou: a cluster of traditional pastel- coloured houses in the center; rows of more modest dwellings with small gardens and orchards on the outskirts, and a few dilapidated Khrushchev-era pre-fab. buildings, surrounding what seemed to have been, the local factory. We stopped for lunch in Pavlikov. There was a picnic table on the village square, surrounded by a few houses. Some games had been installed nearby for children to play on, but there wasn't a soul to be seen. 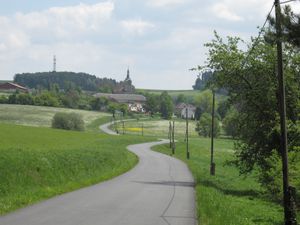 We continued our way on the Radweg that we had caught up with in Bela. Again, the road was up and down with a lot of painful ups... Dubec, Borek, (train station !), Bernartice, Racov, Stare Sedlo (very beautiful church)... all in all, a super afternoon of pedaling through the scents of meadows and pine forests... but often on very poor tracks. The sun was out, it was hot and lovely summertime cumulus clouds hovered through the blue skies overhead. What more could we ask for ? In Kladruby, we decided to go straight to Stribro (6km), instead of going the full length of the Radweg (12 km...).

Arrived on the Mze river bridge at 15.30. Most of Stribro is built on the heights overlooking the river, so we pushed the bikes up-hill (once again),  on the wide cobblestone street, all the way to the main square.

On our way there we came accross a guy who had probably escaped from a lunatic asylum. He was in full battle dress with cap and boots; so was his 6 year-old kid. Their muzzled German shepherd was carrying the bags...

Hotel Rybicek seemed a very good place to stop. In addition to being a small 'pension' it ran its own brewery on the premises. The large shiny copper vats that were used to make their own beer were installed at one end of the restaurant room. The brewer worked there all day long producing fresh batches of beer from ingredients that were put together in a small room just off the back-yard. Hops ran along a series of over-head cables strung from one side to the other of the 'beer garden'.

Since we could not hang the tents to dry in the back yard, we attached one end of my 10m clothes-line to the shower pipes and the other end to the pegs in the small corridor, running the line back and forth. All the bathroom floor-mats were put to contribution under the dripping nylon to avoid damaging the wooden floor-boards...

The clothes were hung to finish drying in the cupboard. The small city center, basically one very large square surrounded by beautiful pastel- coloured buildings, was our next destination -on foot this time !  The town was quite empty in the late afternoon, except for a few 'Fangios' racing their run-down Ladas on the hot cobblestones.

The shops -both their windows and their contents- were quite typical of what I'd seen so often in 'Eastern-Block' countries: sad displays of discoloured boxes, cheap plastic toys, small appliances, shoes, pop bottles, junk jewellery, combs and hair-clips, etc.

Surprised to see so many of these places run by Chinese nationals ! Picture taking of the beautiful Town Hall would have to wait till the next day: the sun was right behind it and the strong back-lighting would have spoiled the detail.

The main square, the couple of streets leading into it and the historic bridge at the bottom of the hill were the highlights of this interesting little town.

A 1L glass tankard of beer from "U Rybicek Rodinny Pivovar" helped clear the dust, at the end of a 'physical' the first day in the Czech Republic.

An excellent dinner of roast duck, cabbage and dumplings thoroughly soaked up the second Liter.